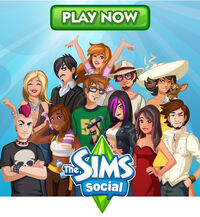 Characters in the Sims Social (with the exception of Bella Goth) are not interactive as a Sim. Most will appear in pop-ups with set dialogue that initiates a quest. Others will appear in non-quest game pop-ups, such as Barbara Belle who will offer you the opportunity to spend Sim Cash for more energy when you are out.

There are also seasonal characters who will appear for specific holidays, such as Halloween.

Shane Shaw
Add a photo to this gallery

These characters are only around for a short period of time, often having to do with a holiday.

Zeus
Add a photo to this gallery

These celebrities were mentioned as appearing soon on the Sims Social Blog, but so far haven't appeared in the game.

Marisim Monroe (Marilyn Monroe)
Add a photo to this gallery

Retrieved from "https://thesimssocial.fandom.com/wiki/Characters?oldid=53462"
Community content is available under CC-BY-SA unless otherwise noted.