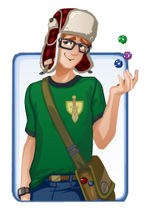 Eugene Hackett is a character in the Sims Social who will give your Sim quests. Your Sim cannot directly interact with him.

Eugene Hackett is the leader of the Littlehaven Mad Scientists Society. He was born and raised in the town, and still holds the Littlehaven High School record for most wedgies received in a single academic year. He has a twin sister named Eugina Hackett. He helped to create the SimSnap mini game. Eugene first appeared as the "Technical Difficulties" guy whenever there was difficulty logging into the game from Facebook.

Until recently he was not named; he was popularly called either the "Geek Guy" or the "Technical Guy" on the Sims Social Forums. Many people have an active dislike of him since he appears when there are game problems.

Retrieved from "https://thesimssocial.fandom.com/wiki/Eugene_Hackett?oldid=46842"
Community content is available under CC-BY-SA unless otherwise noted.